The Root of Evil:
A Short Story
by Jonathan D. Scott 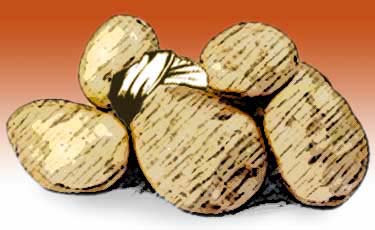 "When did you send in your submission"

"What exactly was the nature of your world’s record, Mr. Wilson?"

"It weren’t a world’s record, per se. It was what you call an oddity. It was a potato that looked like Osama bin Laden."

I could hear a painful sound through the phone receiver. "Yes, I do remember that. You see, Mr. Wilson, what we’re looking for are world’s records."

"But you got a man in 1936 who grew a turnip what looked like Franklin Roosevelt."

"Well, that was different. Roosevelt was a national hero. Osama bin Laden was a despised terrorist. Besides, we can’t take a photograph as evidence, they’re so easily retouched these days. Do you still have the potato?"

"Yeah, it’s in the freezer, but it’s getting old and froze."

"Too bad, Mr. Wilson. Now if you had eaten the most number of potatoes in one minute…"

"Come in and sit down, James."

"Thank you, Reverend. Sure is nice of you to take the time."

"Always have time for a parishioner. Although I can’t say I’ve seen much of you in church. How’s Maudine?"

"I’d be lying if I said she was fine, Reverend. Money being the way it is."

"Take all things to the Lord in prayer, James."

"Well, that’s just it, Reverend. That’s how this all started."

He took off his glasses and rubbed his eyes. "Is this about your potato?"

"Yes, sir. You see, just about the time my unemployment run out, Maudine got fired from Ms. Gilmore’s and, on top of that, our apartment building’s being tore down. Jimmy broke his arm playing basketball and we had to take him to the emergency room. Seven hundred twenty seven dollars and thirty five cents."

"Maudine just broke down, Reverend. She wore herself sick that we’d wind up on the streets. She’s heard you tell take all things to the Lord in prayer, and so she decided to do just that. She took it all to the Lord in prayer. She first did it in the quiet of her heart, you know, but soon she was shouting ‘Jesus, Jesus’ so loud that they started banging on the ceiling."

"It started getting on my nerves, not that I mind hearing the name of the Lord, Reverend. But finally I went outside to take out the garbage and this potato rolled out of the bag."

"The very one, Reverend. It had to be the answer to our prayers. It just had to be. I mean, how many times in a man’s life does he find a potato with a face on it? And somebody that famous. I mean, it had his turban and everything."

The man started cleaning his fingernails. "Yes, James. I heard about it. But why is this something you’ve come to me about?"

"Here’s the thing, Reverend. God performed this miracle, and a real miracle it was, but it don’t seem to have brought any cash with it."

"Well, James, the Lord moves in mischievous ways, His wonders to perform."

"I thought it was ‘mysterious ways,’ Reverend."

"James, there’s a white man on the phone. He says he’s from the TV."

I had to get up off the can to answer the phone.

"What’s he want?" Maudine shouted to me from the kitchen.

"We’re a local community access station. I heard about you and your potato from Mrs. Monroe from your church. Her nephew works with my sister at the glass works. I’d like to bring out a camera crew to your home and interview you."

"You want to come here?"

"Lord! Don’t let nobody from the TV come into this apartment!" Maudine said. "What’s he want to come here for, anyway?"

I held my hand over the receiver. "He wants to interview me."

"Praise Jesus! How much is he gonna pay you?"

I took my hand off the receiver. "How much does this pay?"

"The thing is, Mr. Wilson, today fame is money. We had a man on our show once who invented a machine for removing ear wax and he got a hundred thousand dollars from a venture capital firm."

"Lord! Do you think I could get that much?"

"How much?" Maudine asked again.

"Now the thing is, Mr. Wilson, I can’t promise that anything like that will happen to you."

"I mean, finding a potato with the face of Osama bin Laden isn’t like inventing an ear wax machine."

"But you never can tell."

I can always tell when a white man is talking down to me. "Just what is your show, Mr. McTavish?"

"You can quit your praising, Maudine."

"Are you nervous, Mr. Wilson?"

"Well, there’s no need. My viewers just want to see you as you are."

"Oh, no. We don’t want nobody to see us as we are. Maudine’s been driving herself crazy fixing things up. The stress just knocked her off her regularity."

I thought a little joke might lighten things up. I was right. He started laughing.

"That’s great, Jim. May I call you Jim? That’s just the sort of thing I’d like you to say on camera. Mike, let’s get this thing rolling. This guy’s a pistol."

A little red light came on the front of the camera. I could feel beads of sweat start on my forehead.

"I’d like you to meet Jim Wilson, the man who claims he found a potato with an amazing shape. Is that right, Jim?"

"Sure is. Only it wasn’t so much the shape as it was the wrinkles and the spots."

"Sure is. Only it wasn’t so much the shape as it was the wrinkles and the spots."

"Now here we have a picture that Jim says he took of the potato. Can you zoom in on it, Mike? Over here. No, that’s about as steady as I can hold it. Now, you say you think this looks like…who? Would you tell us?"

"Osama bin Laden. You should know that already, Mr. McTavish, I’ve already told you. Look here, don’t mind my fingers. You see, these lines are his turban and those two spots are his eyes and that little crack is his mouth right above his beard."

"Hmmm. What do you think, folks? A potato with the face of Osama bin Laden? Or is it just a clever ruse? Do you own a copy of Photoshop, Jim?"

"It’s retouching software for the computer."

This man was getting on my nerves. " I don’t own a computer."

"That so?" He looked into the camera and made a face with his eyebrows. "Do you still have the potato?"

I had it in the pocket of my nice blue jacket. "Here it is, Mr. McTavish. It’s been in the freezer for a couple of weeks. Looking back, I don’t think that was the best thing to do. It’s sort of turned ill on me."

"Wrong side, Mr. McTavish. Here, let me turn it around."

"Ah yes. Looks a little like Mr. bin Laden had a big night out on the town. And speaking of that, have you ever had any contact with al-Queda, Jim?"

"Right. Were you ever stationed overseas?"

"In the Middle East?"

"I served in Desert Storm if that’s what…"

"Were you ever in Saudi Arabia, Jim?"

He did that thing with his eyebrows. "So, Jim, was there some connection between you and bin Laden?"

He did that thing with his eyebrows. "So, Jim, was there some connection between you and bin Laden?"

"There ain’t a connection except I almost bit his head off in my potato salad. I think I’ve had enough." I stood up.

"Just a couple more questions about where you were on September 11, 2001. What are you doing? Hey, easy! That’s an expensive shirt! Better cut the camera, Mike."

"God God! Didn’t we pull the cord on the phone?"

"It’s not the phone this time, James. It’s the doorbell."

"The doorbell? Let me see what time is it. Three twenty in the morning!"

"Well, I’ll answer it enough to knock the block off anybody who comes and rings my doorbell at three twenty in the morning."

I pulled some pants on over my shorts while I hopped into the living room. "Hold your horses." I said so whoever it was could hear me.

It was two white men wearing suits. "What the hell do you want?" I asked, not feeling very polite. The day before I had had four phone calls and Maudine three.

"If I ain’t, I got the wrong driver’s license."

They stepped in. "I’m agent Reaves and this is agent Murdoch. We’re from the National Security Agency." He flashed something at me. For all I knew—it was three twenty in the morning—it could have been something he got from a cracker jack box.

"Couldn’t this wait until morning?" I asked.

"Where the security of the nation is concerned, there’s no waiting until morning."

"Security of the nation? What’s that got to do with me?"

"Is this about the goddamn potato?"

"James, I don’t want to hear you cussing."

"We don’t owe you any explanation, Mr. Wilson. You’re just coming with us now."

The tall guy behind the short guy pulled a gun from a shoulder vest. "Hey," I said. "Put that away."

"Come along. There’s no reason to get dressed, Mr. Wilson. They’ll have a uniform for you."

"Uniform? Where the hell am I going?"

"James! What did I say about cussing?"

"Maudine, there’s two men out here from the FBI what are trying to arrest me."

"Not the FBI." The two guys looked at each other. "The National Security Agency," one of them said.

"Don’t you fellas have a warrant?" I asked.

"Maudine, I only got three minutes to talk."

"Praise Jesus! I just knew it was you when the phone rang, James. Where are you?"

"I don’t know, Pumpkin. In some foreign country."

"Seems like they was doing a wiretap on some terrorists and one of them called our house."

"Are you all right, Pumpkin?"

"You won’t believe what happened after they took you away, James."

I was afraid to ask.

"Yesterday while I was cleaning the floor, there was this little man knocking on the door. He had on sunglasses on even though it was raining outside. He couldn’t speak English too good but he asks me to buy the potato."

"I told him it was looking a little piqued, but he says he doesn’t care. I say ‘You might as well take it, it hadn’t brung us nothing but trouble.’"

"I was scared to ask, but as soon as I hand him the potato he gives me this little black bag. Lord strike me down if I’m lying. After he leaves, I look inside and there’s five thousand dollars!"

"The Lord didn’t strike me down, so you know I’m not lying. I paid off the lady from the hospital, the light bill, and last month’s rent. Jimmy and me are going to move in with Mabel Carter--she got that spare room--until I can find us another place to live."

"You just stay where you are, James. You know Mabel never did care for you and besides, it’s crowded enough as it is".

I thought it over. Here I was getting three squares a day, and all they was doing to me was making me watch them flush the Koran down the toilet every once in a while. "It’d save on food money," I said.

"You know it would, James."

"I don’t think I’m going to be able to call you again, Pumpkin."

"It don’t matter cause Mabel don’t have no phone anyway."

So there it was. The reverend was right after all. The Lord do work in mischievous ways.