The Miraculous Powers of Missy McKinnick

Sorry, no phone format available yet. 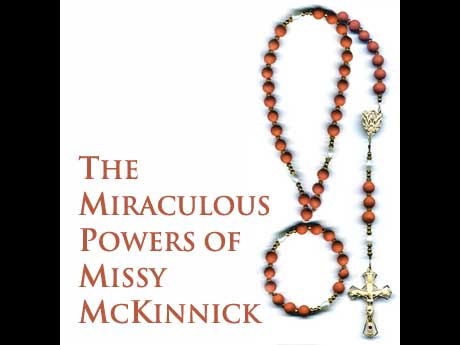 "Bless me, Father for I have sinned. It’s been three months since my last confession."

"I’m sorry, Father. Mom brings us every week, but I’ve been hiding in the choir loft."

"And your mother doesn’t notice?"

"There’s too many of us for her to keep straight, Father."

Father Paul rubbed his hand across his cheek. "You must be one of the McKinnick kids."

"The little one who always wears a pink dress?"

"Ah," said Father Paul, reluctant to further violate the secrecy of the confessional. "So why do you hide in the choir loft, Missy?"

There was a silence in the darkness.

"I’ve been scared to come to confession, Father. I’ve been so bad. I’m an evil person."

Hearing confession, in spite of its requirement for the faithful, was the most onerous sacrament for Father Paul. He was uncomfortable being cramped for hours in a dark closet, a pretense of anonymity between himself and his parishioners. There was rarely anything to engage his attention. Husbands who were involved in blatant extra-marital affairs spoke simply of losing their tempers with their children. Physically abusive alcoholics owned up only to falling asleep during mass. Children were the worst with their endless recounts of teasing their siblings or tormenting their pets.

"Now what would make you think you’re evil, Missy?"

"You’re not allowed to tell anybody what I tell you, are you, Father?"

"Well it may have been God that started it. I don’t really know. I’m hoping you can tell me."

"First I need to know what you’ve done that makes you think you’re a bad person, Missy."

"Do you remember last summer when I was really sick, Father?"

"Of course," he said, comfortable that it was not the first lie to be told in his confessional.

"I had a real high fever. I couldn’t even come to Mass."

"That doesn’t make you an evil person."

"That’s not it, Father. You see, when I had this real high fever, I dreamed that a man came to me."

"A man?" he asked, suddenly alert to how he might reconcile the confidentiality of the confessional with a responsibility to report child abuse. "What sort of man?"

"He had a beard and was dressed in a robe. Like Jesus, but it wasn’t Jesus. I think it might have been one of the disciples."

"Ah," he said, only slightly disappointed.

"He told me I was special. That I had special powers."

"What sort of powers?"

"He didn’t say, Father, but when I woke up Michael came into my room and started jumping on my bed."

Father Paul struggled to suppress his impatience. He knew there was a line of the penitent outside the confessional. "Yes?"

"Well, I wanted him to leave, so I thought real hard and said—just in my head—Michael, stop jumping on my bed and go over to Patrick’s house. And he did, even though it was raining."

"Maybe you really said it out loud, and your fever made you think it was in your head."

"No, Father. Even if I had said it—which I didn’t—he wouldn’t have done it. I made him do it. It was the Power the disciple in my dream was talking about."

"Then I tried it on Mom a couple of days later. She was yelling at all of us about not doing our chores."

"God wants us to honor our father and mother."

"You don’t understand, Father. I told Mom in my head to stop yelling about the kitchen and call out for pizza. You know what she said, Father? She said, ‘Hells bells. I give up. You just do what you want. I’m going to call out for pizza.’ But I didn’t make her say ‘hells bells.’ That was her idea. Maybe she already went to confession about that."

A smile crept across Father Paul’s face. "I’ll bet that’s not the first time your mother’s called out for pizza."

"Then, on the first day of school I made Sister Sharon sit me in the back of the room, right next to Molly. Molly’s my best friend."

"I keep trying to tell you, Father. You’re not getting it." There was a current of petulance forming in her voice.

He could hear a small but definite groan.

"I’m not dumb, Father. I know what imaginary is, and this isn’t imaginary. I sat in the back of the room thinking, Pick up the chalk, Sister Sharon. Now roll it around in your hands. Now put it back down. Now scratch your nose. And she did all those things. I’m not lying, Father. There was chalk all over her nose. Everybody started to giggle. I did it. I made her do it. That’s why I was afraid to come to confession. I’m evil. I’m an evil person."

Father Paul let his head fall into his hands. He felt a slight throbbing in his temples. "You haven’t made anyone do anything bad have you?"

"No, Father, but what if I do? I can, you know. I’ve been doing it to my Mom and Dad and Sister Sharon and even Molly. I could make anyone do anything, even if it were the baddest thing in the world. What if the disciple in my dream was really Judas?

Father Paul had a vocational abhorrence to anything belonging to the dim world of the metaphysical. But—and the word crossed his mind in spite of his rational determination—his religion bid him to believe many things that were contrary to reason. "I believe that you believe it, Missy. If you like, I’ll say a special prayer for you. Just say three Hail Marys…"

"What if I prove to you that I can make people do things?"

"Now how would you do that?"

There was another silence.

"Okay, Father. What if I make you do something?"

"What would you make me do?"

"I’m not going to tell you. If I told you, you might be able to keep yourself from doing it. You’re a priest, you know."

He tried to squint through the slats that separated him from the girl. "Then how would I know you were making me do it?"

"Oh, you’ll know, Father. Someday I’ll come to Mass—you know we always sit up front—and I’ll make you do something funny. It’ll be something everybody’ll laugh at. You’ll see. I’ll make you believe me."

"Okay, he said, despite an unwelcome tightness forming in his stomach. "You make sure you come back to confession when your mother brings you next week. No more hiding in the choir loft. For your penance, I’d like you to say three Hail Marys, and now make a good Act of Contrition."

For a long moment Missy said nothing and he shuffled his feet, fiercely resisting the reminder that not all his actions were safely conscious.

"Oh my God, " she began, "I am heartily sorry for having offended Thee, and I detest all my sins…"

He listened closely. Her words were precise. Yet by the tone of her voice he could tell she was smiling, almost as if she were smirking, as if she knew something about which he was afraid to imagine.